The purpose of this site is to bring awareness about LongArmLegal.com and the individual behind it Alan Kippax.

He is currently involved in a Multilevel Marketing Scam (MLM) that sells worthless products and has been shutdown in England and Canada. His current endeavour is HomeRun International, also known as HomeRun Opportunity.

Beware. Alan Kippax has been convicted of many crimes and is known to be dangerous. Ensure you separate yourself from this individual.

Do yourself a favour and Google Alan Kippax Scam to really see the scope of his failed dealings.

Who is Alan Kippax? 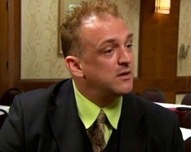 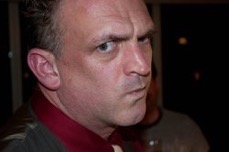 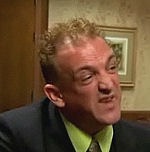 Alan Kippax has most recently run the company BIM - Business in Motion and was found to be an illegal pyramid scheme. His assets were repossessed and distributed to people he was in debt to. He has currently settled in the Philippines and is setting up a duplicate company of BIM called HomeRun Opportunity also called HomeRun International. If you read through the information below you will see the exact same “Products” on his new company sites:

Thanks to email tips from users in the Philippines we have these additional links below:
hriearnfirm.byethost4.com/HomeRunOpportunity/index.php/login/index
https://www.pinterest.com/pin/491244271837293834/
http://www.24article.com/earn-like-a-baseball-player.html
http://www.articlesbd.com/article.php?title=A-Rare-Opportunity-By-HomeRun-International&article=479738


The site clams “HomeRun International and its unmatched cash-making "Time Leverage System" is about to start and is going to produce many, many millionaires within its first year!”

Again it is just another Pyramid Scheme to rip off many more people like he did in Canada and the US.

He has also created a website longarmlegal.com to which he pretends he is a law firm and “investigates” which is actually harassment. The site has no phone number and the addresses are all fake. Read below for more information.

Edit: longarmlegal.com is now down as it has not been renewed. (screenshots below)

Also check out hriscam.com to see even more information about HomeRun International as most of his domains have been seized by the US Government.

Alan Kippax has had the following aliases. Jack Masterson. Mark Santos. Beware, he has been attempting to communicate to people via email and Facebook messenger. Do not reply as he will do anything to try and blackmail you and cause you further harm.

About Alan Kippax from the Winnipeg Sun

“Convicted fraudster Alan Kippax was two years old when he and his family left their native England for Canada.

Forty-six years later it's bye-bye to the Maple Leaf and back bacon and hello Union Jack and mushy peas.

Kippax was sentenced Wednesday to 5 1/2 months time served for his role orchestrating a "get rich quick" scheme that cheated investors out of millions of dollars. He will be deported to England within days.

Kippax, 48, was set to be sentenced last December but in a last-minute reversal told court he wanted to withdraw his guilty plea.

After retaining a new lawyer, Kippax abandoned the move.

Kippax headed Business In Motion (BIM), a company that purported to sell vacation travel packages and other products, but in reality sold nothing of value.

A number of local junior BIM recruits have already been sentenced for promoting the Ontario-based pyramid scheme at Steinbach-area information seminars in 2008 and 2009.

Court has heard participants in the scheme were enticed to make individual investments of between $3,200 and $3,600 and promised financial rewards for bringing in additional investors.

Seminar attendees were told if they met certain recruitment goals they could make as much as $100,000.

BIM was nothing more than a "money-moving scheme ... that preyed on the uneducated and trusting," said Crown attorney Peter Edgett.

Defence lawyer Tim Valgardson argued the BIM business model is similar to the one used for lingerie or candle parties.

"It was never their intention that anyone lose their money," Valgardson said. "Mr. Kippax thought he was operating within the law."

Cheated investors launched a class-action lawsuit and in February won a $6.5-million judgment against BIM and Kippax.

In 2010, Kippax was sentenced to three years in prison for an Ontario car crash that killed his cousin and seriously injured two people. After that conviction, immigration officials revoked Kippax's residency status.

In July 2012, Kippax was one of eight Brantford, Ont. residents arrested after police seized $20 million worth of marijuana.”

Other Articles about Alan Kippax

Alan Kippax had made a fake Law Firm site to go after Truth Tellers. This site was longarmlegal.com. This section is an investigation into that site and how it was easily discovered to be a fake.

UPDATE: The site is offline as Alan did not renew the hosting. This section is based on information available at the time and is still here for archive purposes.

After Alan Kippax made his threats to individuals, after realizing he could not get a rise out of anyone he started to create Long Arm Legal to try and intimidate them into a corner. In the email threat from Alan, he stated he will take action and do everything thing in his capability to try and make people look like criminals. In the image below for LongArmLegal WHOIS registration we can see on October 22, 2015 the domain was purchased.

We also learned about Alan’s new company HomeRun International. After researching we found his site homerunopportunity.com. From there we just did some domain info searching.

We looked up both domains, looked up the registration dates, where the site is currently hosted and noticed something rather funny. They are both registered two days apart, not only that, but the websites run on the same web server. Only the owner of both domains can host it on the same server…

This information is the most important to start with. The fact that they run on the exact some IP is not a “chance” situation. He is the man behind them both. 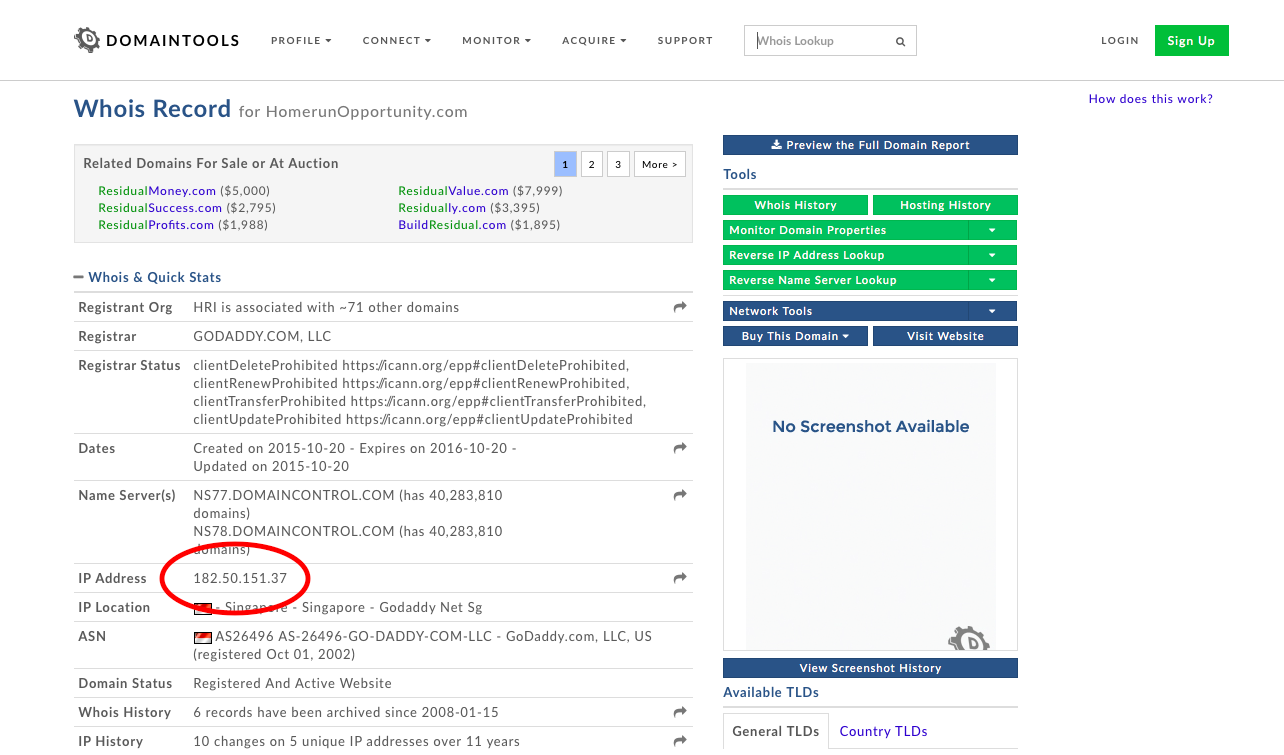 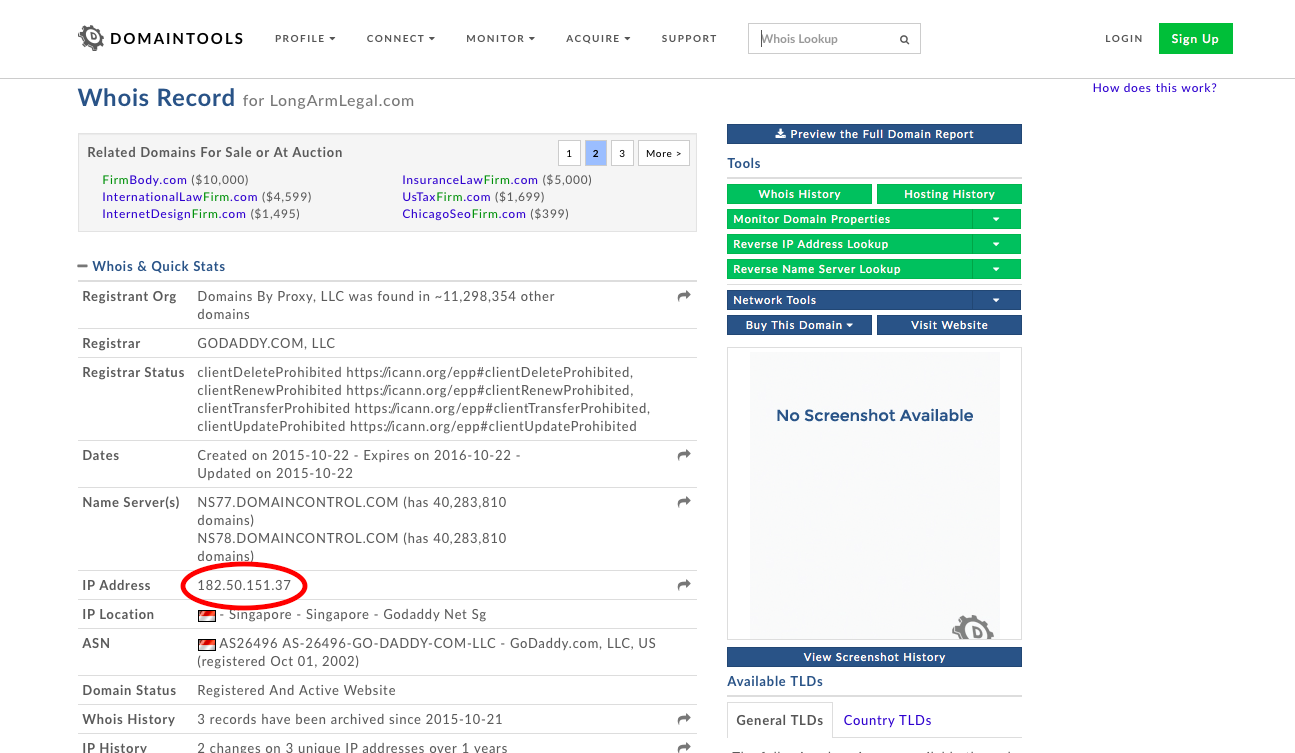 A law firm in 3 different countries and not a single phone number? Really? Also the addresses were hilariously picked. We decided to call all the buildings associated with the addresses on the website, and surprise? LongArmLegal.com doesntt have an office anywhere…

Website design.. lets look at a real law firms website http://www.bakermckenzie.com/Canada/Toronto/. They even have a phone number… but its more about the logo of LongArmLegal that set us off to the authenticity of the law firm. You would think a big law firm could afford a more talented graphic designer.

Zoomed in on logo 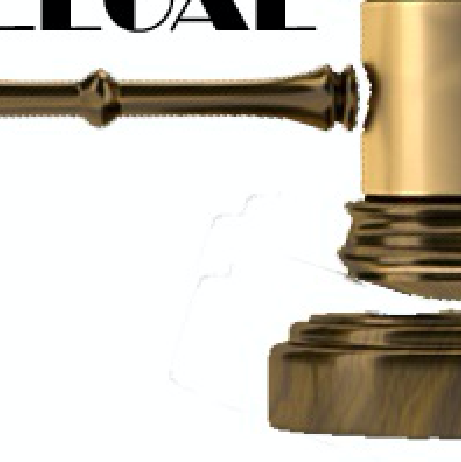 In this zoomed in snapshot of the LongArmLegal logo you can see the amazing photoshop work that was done when they took the Gavel from another photo. No International Law Firm would ever allow this. It makes them lose credibility, or in this case, proves they a fraudulent.

All email correspondence from LongArmLegal came from info@longarmlegal.com, then randomly email starting coming in from a gmail account. You would think if you worked for a multinational company that they would at least give you a personal email. 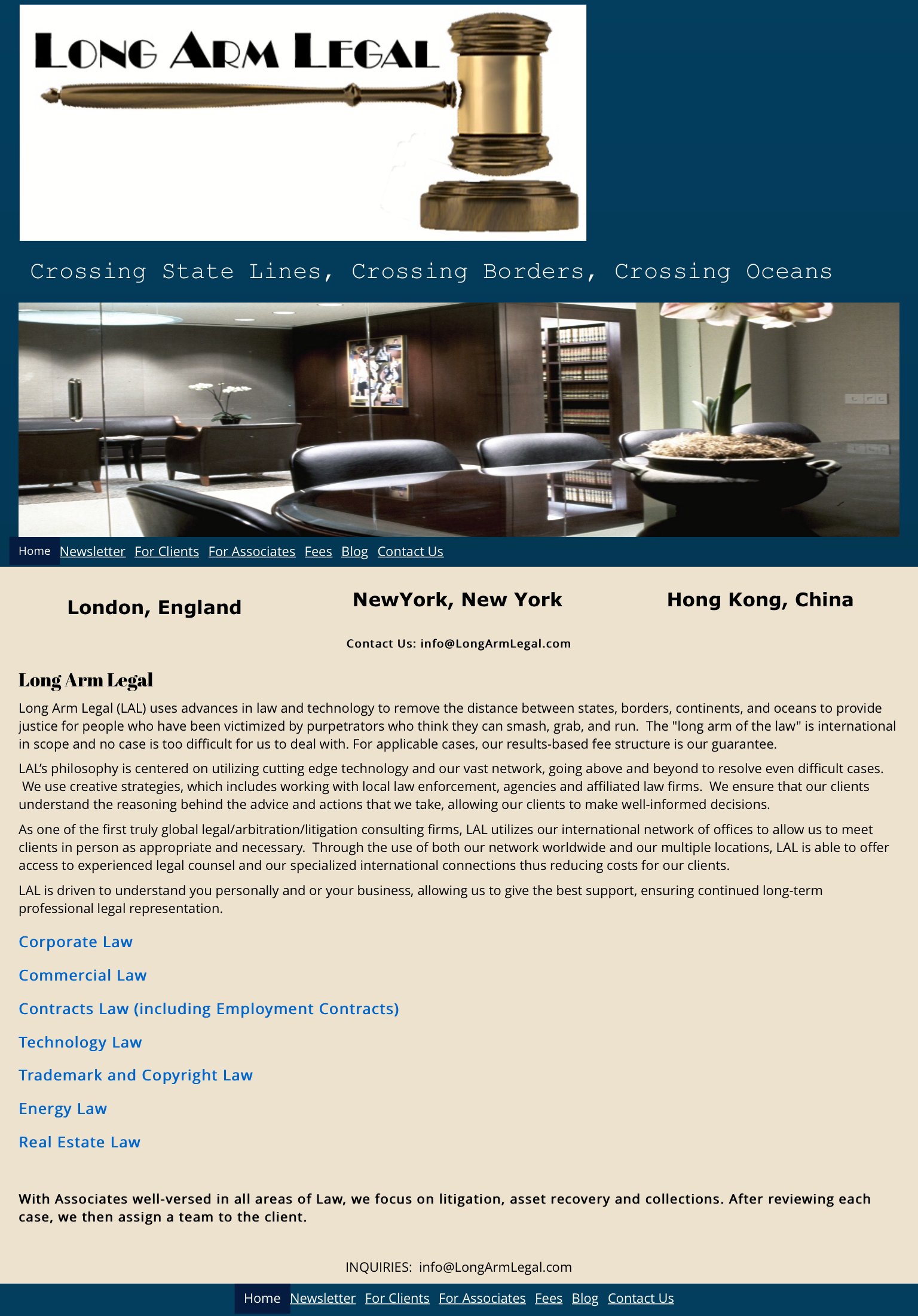 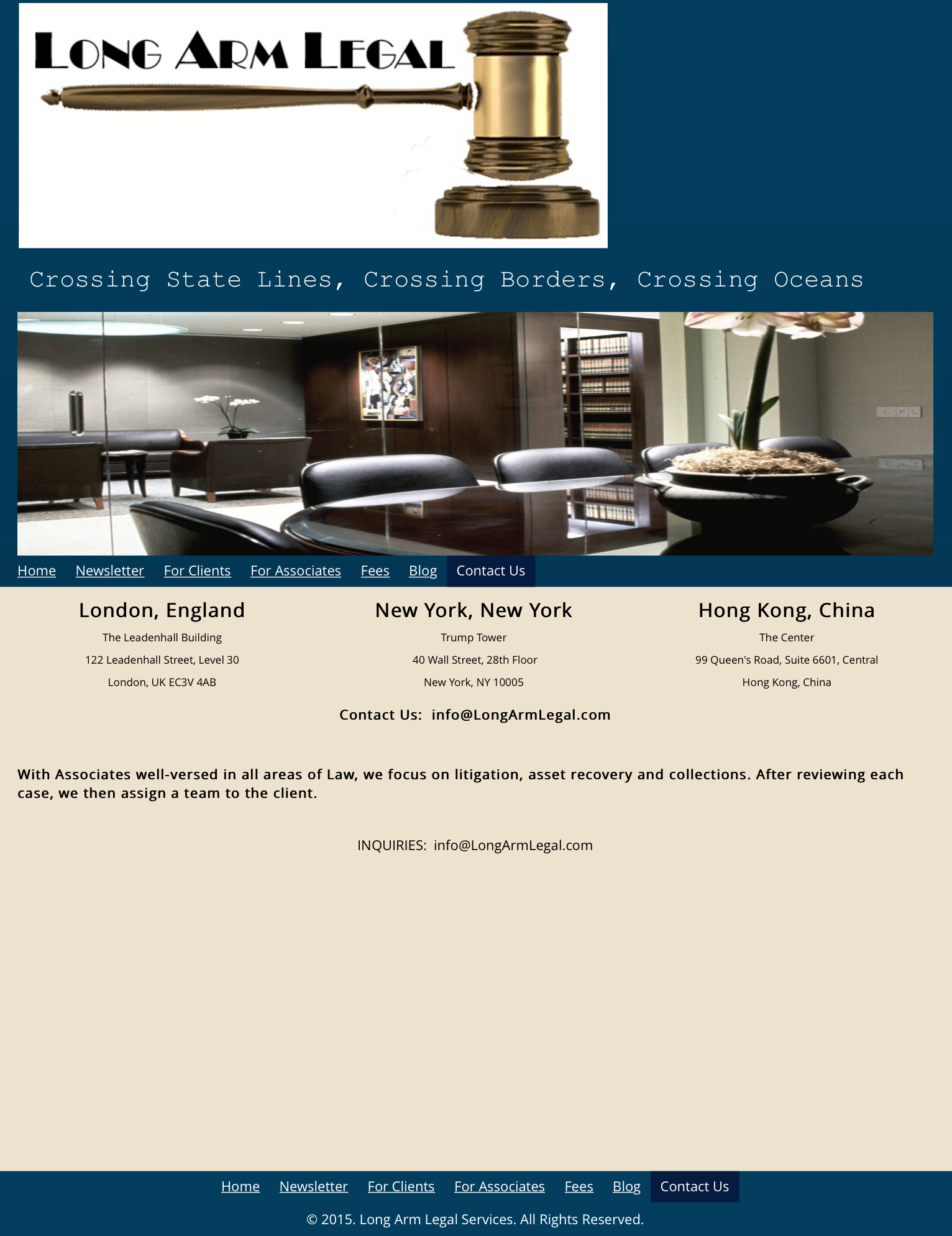 It has been determined through our investigation that LongArmLegal is a fake company that cannot by contacted any other way other that email. Their is no business registration in the US or any other country for that matter. If you have been contacted or threatened by anyone stating they are from LongArmLegal please email us at report@longarmlegalscam.com

As we update the site with new information we will tweet it out! Link Here

Some newer links and info about Alan Kippax